The drive to Albania deserves its own post. We left Pristina Friday afternoon to spend the long weekend exploring Albania with two of JR’s co-workers, Amy and Elizabeth. Amy was resourceful enough to check out GoogleMaps before we left, and it had approximately 64 steps to the directions. And we were off!

I’d only been in the car in Kosovo twice before this weekend, so I was still pretty nervous. People drive very fast here, no one uses turn signals, and there are these traffic circles that seem to be “anything goes, try not to die.” Also, when you slow down to enter a traffic circle, or make a turn, people come up to your car and try to sell you a bunny rabbit. This happened a lot. 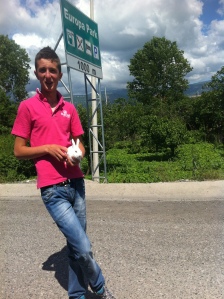 We were in Amy’s car (our car is being shipped over, and could arrive in anywhere from 4-8 weeks), and she was the only one with experience driving over here, so she drove for quite sometime. With about an hour and a half left in the drive, she asked if someone else would take over. I volunteered myself. It seemed the lack of road rules would be perfect for my driving style. JR was scared, but our other passengers were blissfully ignorant to my driving record. 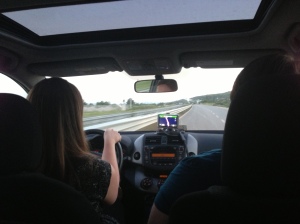 What you see there is a highway. They don’t have many of those in Kosovo and Albania. Much of the drive was spent on back roads that had pot holes, people, goats, bicycles – you name it, it was something we had to swerve to avoid. There appeared to be no laws on passing -you could do that at any time, at any speed, regardless of whether or not you were going into oncoming traffic. There were some road signs, but they were in Albanian, so they were not much use to us. 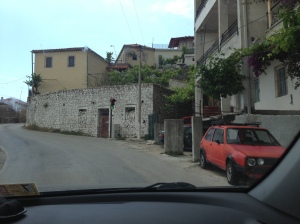 The only stoplight we saw the entire weekend!

Anyway, the driving was sometimes fun (it’s a bit like Mario Kart – doing your best to avoid banana peels and red koopa shells) and sometimes scary. But I thought I was handling it quite well. On Saturday, we wanted to drive further south to find a beach town. We were driving quite high into the mountains, and the roads were very narrow and much to my dismay, they often didn’t have guardrails. Still, I wanted to give a try behind the wheel. 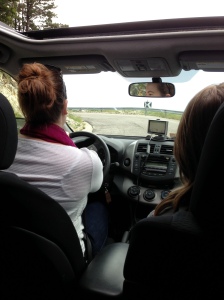 I only lasted about ten minutes. It seemed like as soon as I started driving, the cliffs got steeper, and the curves got sharper. I felt sick to my stomach and wanted to pull over immediately! Everyone was great about it, and so I crawled along super slow until we found a safe spot to pull over and switch drivers again. Mountain driving is not for me. 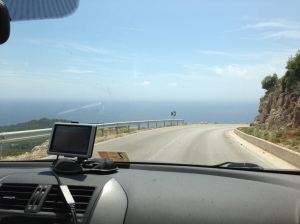 See how you could keep going and just drive into the sky?

JR drove us home, and he was a rockstar while I gripped my door handle and seat belt so tight my hands hurt. As we were leaving, a really cold and thick fog was coming over the mountains. 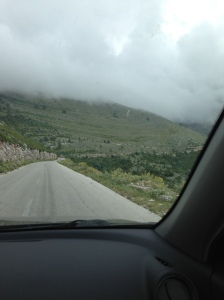 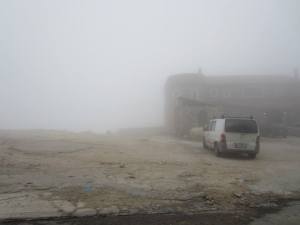 Luckily, he was fearless and we left the fog behind. 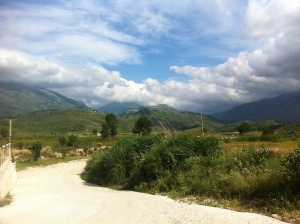 One thought on “Driving in Albania”