We had the most wonderful honeymoon in Santorini, Greece, a small island in the middle of the Aegean. We left last Saturday morning and spent 8 nights there. We had hoped our car would be here by now, but since it is still in transit (it’s either in Greece or Macedonia and it’s either clearing customs or waiting on paperwork, who knows) we hired a driver to take us to Thessaloniki, Greece. From there it was a short 1 hour flight to Santorini.

For the first several days we stayed in a hotel near Perissa, which is on the southern end of the island and known for its black sand beaches. 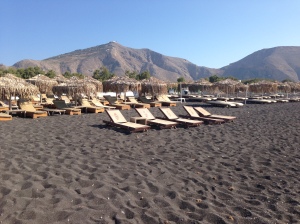 All we really want out of a beach vacation is sunshine, chairs with an umbrella, and possibly most important, someone to serve us drinks. We definitely got that, and more, in Perissa. On the first day as we were lounging by the sea, vendors kept approaching us selling everything from hair braids to hand bags, and they rattled off the most random phrases like “Don’t worry be happy” and “Hakuna Matata.” This happened over 15 times the first day (JR counted). I wasn’t tempted to buy anything until a lady came by offering a massage on the beach for 25 euros (a deep discount she said). How could I pass that up?

She was quite strong for an average sized lady. She motioned for me to turn over on my stomach, which I did. Then, with her speedy nimble fingers, she had untied the top of my swim suit. I was wearing a one piece with a halter-style neck, so untying the top while I was facedown wasn’t too concerning. But then, with one quick motion, she had yanked my suit down from my chest to around my hips. I can only imagine how many people I flashed. But I couldn’t worry about that, because I was in a tug-of-war with the lady to keep the rest of my suit over my bottom. She kept pushing it down further, and I kept pulling it up. JR just sat there in a stunned silence. After losing the swim suit battle, I lay there wondering what I’d gotten myself into. She knelt in front of me and started digging through her backpack and pulled out a bottle of baby oil. The next thing I knew, at least half the bottle was being poured ALL OVER ME. I was completely covered in oil.

The massage itself was wonderful. I got over the semi-nakedness and oil soak quickly enough and felt quite relaxed. It was only after she left and I was talking to JR that I started to get concerned about how the baby oil would likely combat the SPF 30 I had put on when we arrived. I tried to slosh off the oil in the ocean, but apparently I didn’t do a very good job on my back. I got the worst sunburn that I can remember. My back hurt so badly, it was painful to lay down to sleep for two nights. A smarter person would have avoided the sun for awhile, but how could I do that in such a beautiful place?

We saw so many people driving around on scooters and 4-wheelers, and we wanted to rent one. We rented a scooter in Key West and we loved it. So we set off walking down the beach road looking for a place to rent a 4-wheeler. A note about Santorini, restaurant and shop owners and employees will come out onto the sidewalks and into the street to talk you into choosing their place. This tactic doesn’t work on JR, but I’m a total sucker and I think they sense my weakness! Anyway, we passed a bar and this young boy – maybe 8 or so years old – he is all, come in, have a drink, let us get you whatever you need! And I told him we were looking for a 4-wheeler. To my surprise, he assures me that he can get us that. I look around and see no evidence of this being a place to rent a 4-wheeler, but he was working so hard that I had to say yes.

He told us we should buy drinks while another worker called the rental place. At this point, we had no clue what was really happening, and JR was incredibly skeptical. Ten minutes later, we were both surprised when a van pulled up and the boy told us it was our ride. Now, the van had no markings or identification. Neither did the driver but there were was another couple in the back. Still, we got in the car without asking any questions. It was only when we’d been driving a few minutes that I wondered if that was really the best idea. I was trying to recall how the movie Hostel started – I couldn’t remember exactly, but it seemed probable that getting into an unmarked van with a stranger could lead to bad things.

Luckily, the driver promptly dropped us off at Nick the Greek’s Moto Rentals. Oh Nick the Greek – what a guy. I should have taken a picture of him. While we waited in line, we saw another customer hand over their passport. Crap – we didn’t have either of our passports on us. We also failed to bring our driver’s licenses – we don’t carry them in our wallets anymore. The entire morning was starting to seem like a wasted effort. I asked JR if he wanted to just leave then and cut our losses, but he said we should still try. When we were called up to the desk, I sheepishly told Nick the Greek we didn’t have our passports. He said, “No passport, no problem.” Then I told him we didn’t have a driver’s license on us, but we did have a PDF version pulled up on my iPhone. Nick said, “No license, no problem. Just write the number down here.” I swear, he didn’t even glance at my phone. Who knew it would be so easy?

Here are some shots of our 4-wheeler. Ride or die. 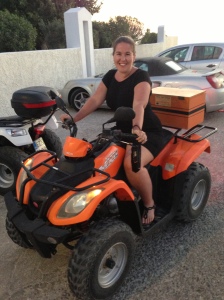 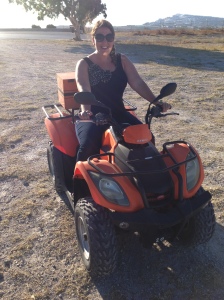 We visited the Red Beach, which is a small, secluded beach. You have to hike/walk about ten minutes or so around a cliff to get there, and it was totally worth it for the views. 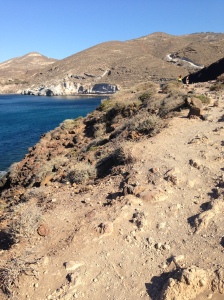 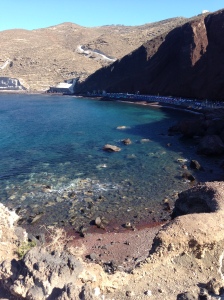 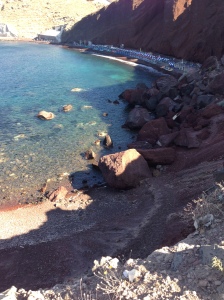 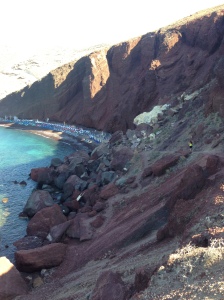 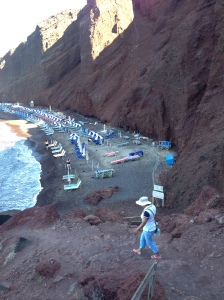 Despite the brutal sunburn, things were going along swimmingly. Then this happened on the third day: 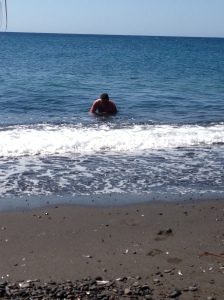 Unbeknownst to me, at the very moment I snapped that picture, the ocean swept away JR’s wedding ring. Stupid ocean. We looked for a while, but the ring is forever lost to the sea. JR seemed upset for a hot minute and then looked down at his ring finger and said “Well I guess I’m ridin’ solo again.” (all credit to Jason Derulo for that amazing song.)

Honeymoon recap to be continued…