As I’ve surely mentioned at least 100 times, Halloween is JR’s favorite holiday. In addition to his tight pumpkin-carving schedule, he was also busy this past week with several events at work, including the kid’s trick-or-treat, the huge kid’s party, and the adult party on Friday.

JR and I have carved pumpkins together almost every year since we started dating. I typically do the standard triangle eyes and toothy grin, but JR has always liked a challenge. In the last few years, he’s really stepped up his game and he’s crazy good at carving pumpkins. Not only does he carve them well, but he enjoys carving several each year. This leaves me with pumpkin guts and seeds all over the house, but it’s his thing. Here are a few he did this year: 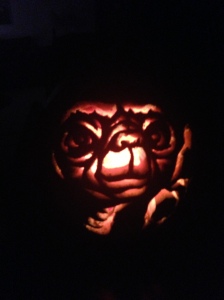 On Wednesday, the little kids visited the Embassy and went to each office to Trick or Treat. They were adorable in their costumes! One of our friends had a spare Scooby Doo costume hanging in her office, and I convinced JR to put it on “for the kids.” It was hilarious, but he would not allow any photos!

Thursday night, the CLO hosted a huge Halloween party for what seemed like hundreds of kids! All of the American families, the locally employed staff and their children, and a group from a local orphanage were invited for a night of fun. I walked over to help with some set up, and I was so impressed by how much stuff they had, and how cool it all looked. There were games (I was in charge of the Witches’ Hat Ring Toss), face painting, a haunted house (which was so well done), food, and so much candy. JR had a werewolf costume and spent the whole party in a cage in the Haunted House. Some kids were pretty scared, others wanted photos with him! Everyone seemed to have a great time, and we are lucky to have a such great people working in our CLO office to organize and run these events! 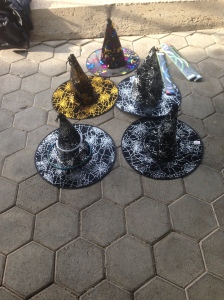 This was my job during the party.

I told you they did a great job with decorating. I couldn’t capture the haunted house very well, but it was very cool.

My favorite werewolf! He was going for “An American Werewolf in Kosovo/Diplomat Werewolf.” 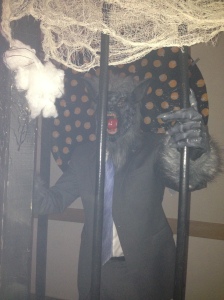 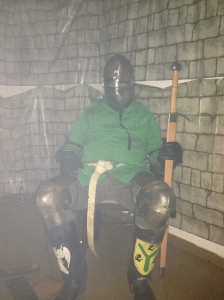 One of the volunteers just so happened to have a full suit of armor!

Finally, Friday night was the adult party. I wore the costume my mom made for me (because she’s fantastic) and JR went as Cousin Eddie. One of our other friends was very excited to wear the Scooby Doo costume. The Count and Countess won the costume contest! JR plans to step up his game next year and take the title. 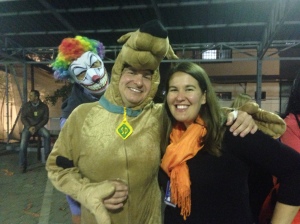