We were released early from work on Tuesday, so JR and I went home to relax for a bit before starting dinner.  I talked him into buying a ham from the commissary (best 19 Euros we’ve spent in a while) and we had mashed potatoes and corn to go with it.  I wanted to make the table look nice so I used our place mats and cloth napkins that we received for our wedding.  Those things never come out of the drawer.  And for good reason – I almost cried when JR actually USED his napkin.  Hello, it’s for decoration only.

JR went a little crazy on presents this year.  Historically, he’s a better gift giver than I am.  I take some responsibility for this but I’m also very easy to shop for, and he’s not.   He went a little overboard this year shopping the markets in Bangkok, so I had maybe 30 presents under the tree (not just from him, though).  He had maybe 6 presents.  Not exactly even-Steven.   To make matters worse, I was not really excited about any of the gifts I had purchased for him.  Case in point, we each opened one gift on Christmas Eve .  He gave me a beautiful scarf from Bangkok.  I gave him a luggage scale.   He smiled and pretended he was pleased with the gift, but upon further discussion, we both burst out laughing because really, I mean who wants a luggage scale for Christmas?  Holy not exciting, Batman.  Luckily he’s a good sport. Also, I did finally come up with a great gift idea for him, it just didn’t occur to me until December 24th.  So he’s going to get a random gift in January that will hopefully make up for my Christmas (and recent birthday) short-comings.

We both received some great gifts from our family and friends, including lots of fun stuff for the baby.  In my early bid for 2014 Mother of the Year, I have yet to purchase a single thing for said baby.  I suppose I should start doing that soon.

We were invited to Amy’s house for a fantastic Christmas dinner with some of our other friends.  We are so thankful to have met such wonderful people here – it really makes it easier to be away from home for the holidays. 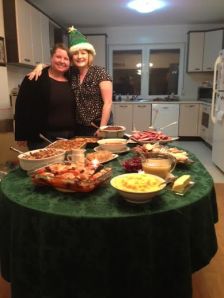 Tomorrow we’re off on one more exciting adventure to wrap up a really great year!