I’m writing what I hope is the final update, at least from me, in the ongoing Shelby saga.  Really, it’s like a TV miniseries at this point, with so many twists and turns and emotions!  But I’m certain of one thing, the world is full of really nice people.

A quick recap from the beginning:  As I was walking to work on September 28, I heard some whimpering behind me.  It was a tiny black puppy with a bandaged front paw, hobbling along to follow me down the street.  That first week, JR and I took her to the vet almost daily to have her paw treated and we worried they would need to amputate it, but with treatment it started to heal  quickly.  We kept her with us for a few nights, but it was not a good situation with our apartment and the baby.  Luckily, Adam the Saint offered to foster her while we searched for a permanent home.

From the start, I would experience these really great, happy feelings that we were going to get her to her new home rather easily, and then that would all come crashing down when every attempt failed.   It’s honestly hard to write down every single thing that I tried, how many people I approached, airlines and pet shippers I called, and research I did online to find a way to get this puppy adopted in Kosovo or in the U.S.

I was embarrassed to post a link to a fundraiser on my Facebook page.  That just doesn’t seem like something I would ever do, and for a dog of all things.  It’s not that I’m anti-dogs, I’m just not a bleeding heart dog lover.  Sure, I cry at the Sarah McLachlan commercials like everyone else, but this isn’t really my thing.  But I got really wrapped up in making sure Shelby was well cared for, and I desperately wanted a happy ending to her story.  More than once, when it looked like all hope was lost and I was truly exhausted of trying to figure it out, I messaged the only dog shelter I know of in Kosovo to ask them about taking her.  The pictures of the shelter broke my heart.  I know the people running it are doing the very best they can with extremely limited resources and a tragically high number of animals in need.  But I didn’t know if I could actually drop her off there.  And if I couldn’t, what else could I do?

I can be very dramatic when I talk about things, and I’m always emotional, but this has been one of the most stressful and difficult things I’ve ever tried to do.  When I said that to JR, he said what about taking the bar exam?  Yeah, that was a tough two months of studying like crazy every day and 3 days of testing, but studying and test-taking are things I do well.  This has been completely different.  There were several times that it caused tension between us, particularly when I obligated us to pay $1,500 in transportation costs, not knowing if we would recoup any of that from donations.  He didn’t agree with what I was doing, but he knew that I was trying to find a way to do the right thing.

The last two weeks were perhaps the most stressful as I was finally ready to give up when a plan to fly a friend to Frankfurt with Shelby, and then transfer Shelby to a pet shipper for her flight to the US, fell through.  One of Shelby’s biggest fans in Kosovo, Helen, helped me with a new plan to fly someone from the US to pick her up and take her back as excess baggage.   JR and I had to leave Kosovo rather quickly due to a family emergency.  The morning we left for the airport, Helen notified me that the ticket had been purchased.  I let out a huge sigh of relief – it was really going to happen!

JR and I traveled all day with the baby in tow  – 3 flights, 7 bags, and over 22 hours – and when we landed in DC, I received a terrible email from Shelby’s foster home.  She had run away and hadn’t been seen since the previous night.  I felt like the universe was playing a giant joke on me at this point.  I even texted a friend to ask if the entire Shelby saga was some kind of bad karma for something I’d done in the past.  I just couldn’t understand why this kept happening!

We waited a few days in hopes that Shelby would return, wanting to avoid canceling the plane ticket in hopes she would be found.  Amazingly, last Wednesday she just reappeared in Adam’s yard.  We hurried to secure her a ticket on our friend’s flight.  It was the final piece and I was determined to make sure it worked.

I called Turkish Airlines to make the request, and when they asked for her breed, I said mixed street dog.  They said that was not specific enough, so I said she was a mixed terrier.  I know basically nothing about dog breeds, but that seemed like a reasonable guess.  I had to wait 24 hours to see if my request was approved, so we were on a very tight time frame.  When I called back the next day, my heart sank as the agent informed me that my request was denied because “mixed terrier” was not specific enough, I had to know her precise breed.  In a panic I said “she’s a Yorkshire terrier.”

Now for reference, here’s another picture of Shelby. 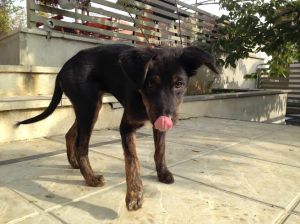 And here’s a picture of a yorkie. 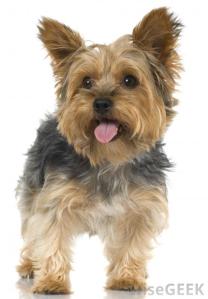 So, a bit off the mark…oops.  I called back the following day and the agent told me that my request had been granted and Shelby had a confirmed ticket to fly to DC on  Monday, November 17.  I couldn’t hold back my tears.  On the day of her scheduled flight,  I was incredibly anxious just waiting for something else to go wrong.  I can’t describe the relief I felt when my friend M messaged me to say that Shelby had arrived, and she was now safe and sound and making herself at home with M and her other pets.

I want to thank so many people who helped make this possible (I feel like I’m accepting an Oscar. Ha.)  Adam the Saint, for fostering Shelby and stepping up when I was completely panicked about what to do.  Amy for providing me with dog-related items and offering support.  Helen and Andi for hosting Shelby for play dates, falling in love with her, and then going above and beyond to help get her home.  Stacey and Lori who had to listen to me at lunch – almost every single day for more than a month – talk about this dog and the latest troubles I faced in getting her to the U.S.  Elizabeth and my mom, who also heard about it daily and often times longer than a lunch hour.  My poor husband, who had to endure all of my dramatics and frustrations and even when he didn’t want to anymore, he still had my back.  The number of people on my FB feed, many of whom I haven’t talked to in years, who shared Shelby’s fundraising page, sent me a nice message, or donated, wow.  M and her husband for sticking with Shelby through all the back and forth, and offering her a wonderful home.  Our amazing group of internet friends who started this whole thing!  I can’t thank you all enough.

This has been such a strange experience, but I’m so grateful that it had a happy ending for one Kosovo street dog.  Here’s a picture of Shelby snuggled up with her new owner!

4 thoughts on “Shelby the Yorkie: The Final Chapter”