We are already more than halfway through our visit home and like always, it amazes me how quickly it passes!  More than a month ago, we were making our way to Ohio.  We had a really smooth day of travel and received so many compliments on Abby.  She was so quiet, smiled at everyone, and made traveling a breeze – except for one minor hiccup.  We had about 2 hours left on our Frankfurt to D.C. flight, and I picked her up to carry her to the bathroom.  She chose that moment to spit up – an unreasonable amount – directly down my cowl-neck sweater dress.  I stood there frozen as I felt it run down my neck, chest, and pool in my belly button.  Abby and JR were not bothered in the least but I was horrified and stood in the aisle in shock for quite awhile.  Cleaning myself up in the tiny airplane bathroom was no small feat. 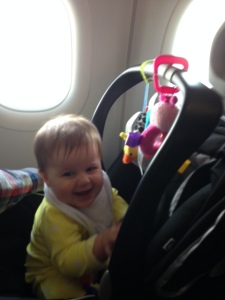 We’ve been really lucky so far, but I’m already nervous about our return travel because since we’ve been home, Abby is increasingly on the move. She half scoots, half crawls all over the place.  It’s going to be much more difficult to contain her now that she’s on the go!

This trip has been all about spending time with both of our families.   We were happy to have a nice Thanksgiving in Dayton, and we’ve been going nonstop since then.  JR had to be in DC for two weeks for training, so Abby and I kept ourselves busy visiting with family and friends and shopping.  A lot of shopping.  Kohls and Target are addicting!

A few months ago I applied for a job – basically it’s another program the State Department is trying out to employ more spouses overseas.   There are hard-to-fill consular jobs at some of the embassies and they want to try to fill those spots by qualified spouses.  You can learn more about the program here.  Honestly, it’s a bit confusing and it feels like a lot of hoops to jump through when we have no idea if we’ll end up at a post with a position available. At the same time, I don’t want to miss an opportunity for work, and from what I’ve read about consular jobs, I think I might really enjoy it.

The first step was to take an online exam with four different parts.  It wasn’t easy and many of the questions were awkwardly worded, so I didn’t have much confidence, but I did pass.  Next I was asked to participate in an oral assessment/interview in D.C.  Travel to DC is not provided, so we wanted to schedule my interview during a time we would already be in the States.  Since JR was going to be there, I decided to make a long weekend out of it and had my interview on a Friday morning and then planned to spend the weekend with him in D.C. while Abby had quality time with my family in Ohio.

I had to be at the interview at 6:50am on Friday – seriously?!  I almost showed up like this but JR  talked me out of it. 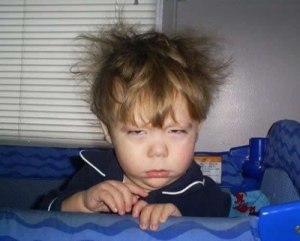 I was with two other people and first we did a 45 minute case management exercise where we reviewed several hypothetical office issues and drafted a recommendation.  After that, I had to wait for about 20-30 minutes before they called me back for my actual interview.  It was nerve-wracking because the two women interviewing me read from a script and explained that they would not be providing any feedback, or really engaging with me in any way outside from asking questions on the script.  I’m used to a slightly more relaxed setting and some back and forth, and that was not happening here.  They just looked at me stone-faced and offered no reaction to my responses.  I waited another 30 minutes after I was finished until I was called back and told that I passed.  Hooray!  Except I’m really not sure what happens next.  From what I gather any employment will all depend on where we end up (we really have no idea right now, which is kind of disappointing because we had hoped to have our assignment already  – possibly another blog post by itself) and what type of jobs are available at post.   So, it has the potential to be a good thing but we won’t know for a while.

The rest of the weekend in D.C. was really wonderful.  Our dear friend Jessica was in town, and she recommended that we have dinner with her at Founding Farmers Friday evening.   We aren’t food critics at all but it was delicious.  They had bacon lollipops.  Genius.  I was also excited to catch up with my friend Sam over a boozy brunch that Saturday.

The best part about the weekend was just having down time with JR, being able to eat dinner without rushing, and sleeping in!   It was great, but I was also happy to get back to Abby.  Now we are full speed ahead to Christmas, and looking forward to presents, baking cookies, and maybe even Abby’s first Santa visit!