We’ve already been in country for more than six weeks – I can’t believe it!  So many things have happened in the last few weeks, but here are the highlights.

– We moved from our TDY (temporary) house into our permanent house and it’s beautiful and we love it.  Due to a scheduling conflict, I was actually not here the day we had to move, and of course, on that same day we were scheduled to receive ALL of our shipments, not just UAB (which usually arrives quickly) but also our consumables and HHE (which usually arrive later).  We are super grateful to have all of our clothes and furniture so fast, but it made for a crazy day that JR had to handle solo.  So far we only know of one major casualty:  the power cord for our TV has not been located.  We ordered a replacement cord online, but it hasn’t arrived yet so we’re lucky that a new friend had one we could borrow for a bit.

– We are almost done unpacking and getting settled into our new house.  When I arrived, despite giving JR and the GSO guys what I thought were really clear instructions, I found every.single.bed in the wrong bedroom.  That meant that we spent the first few hours taking apart every.single.bed and moving each one to the correct room, instead of unpacking.   Lesson learned, nothing will keep me from being here for move-in day in the future.

– Our neighborhood is awesome.  In real life, it’s everything JR would prefer to avoid – small gated community, identical houses very close to each other, and far from the city center.  But this isn’t real life and we don’t own it, and it’s perfect for our time in Tbilisi.  We are so grateful for the little community, and especially how many little kids live on our street.  A few times now we’ve come home from work to find Abby outside with her nanny playing with other kids, and it’s exactly what we wanted.  Our yard is even bigger than I had expected, and we have a beautiful view from our back patio.  After living in an apartment most of our adult lives, it’s awesome to be able to walk right outside from our front or back doors!

– I started working and I’m really enjoying it so far.  I barely have a clue what is going on, but my co-workers are patient and nice, and so far it seems like it will be a good fit for me.   Things are also going very well with our nanny, and that makes it a lot easier to leave for work in the mornings.

– We are street legal!  Although we bought our car the day after we arrived, we couldn’t legally drive it until we completed our registration.   And we couldn’t be registered until we received our Diplomatic IDs which took 3 weeks.  In the meantime we had to rely on taxis, which was a huge pain with Abby’s car seat, and annoying for JR to get to work because sometimes they pull up within 2 minutes and other times it takes 15.  Being able to drive ourselves around is so much easier and we feel like we can finally explore the city.  On the one hand, I feel prepared to drive here after living in Kosovo, but at the same time Tbilisi is a much bigger and busier city (with poles that come out of NOWHERE. Yes, I already backed into a pole), so there will still be a learning curve. 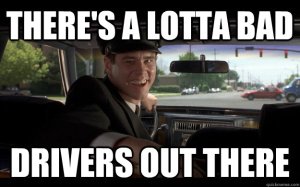 – Many people talk about the honeymoon phase of arriving at a new post.  For me, I definitely experience that, but with intervals of “oh my gosh, this is terrible, I can’t live like this” – typically in reaction to something that is relatively trivial, like for example the pedestal sink in my bathroom (why, why why would ANYONE ever want one of these in their master bath!?).  Other issues, like the serious ant invasion, stress me out but I’m hopeful we will get them resolved soon.   I was just talking to a friend about this sort of thing, how the highs you experience are very high, but the lows can be really low.  Being able to react rationally and keep a sense of perspective is something that I’ve tried to work on with all of our travels.  Don’t sweat the small stuff, and all that jazz.

– Having friends wherever I am is really important to me.  I’m lucky to have so many great friends from various stages and places in my life, and while sometimes the prospect of making new friends is daunting, I know I need to do it to make this place a happy home.   Everyone we’ve met has been so welcoming and helpful, but at first you still wonder, will I really make close friends here?  If I had any doubt, a text from a new friend that ended with “pick me up, Thelma!” helped me realize that we’ll have lifelong friends here in no time.