Our sweet 9-year old cat Annabelle died this past Friday night.  She had some kidney problems that started in the fall, and after a few rounds of blood tests, antibiotics, IVs, and a change in cat food, we thought she had recovered but over the past several weeks her health deteriorated quickly.  The local vet was kind enough to make several house calls to set up IVs and administer another round of antibiotics. We hoped she would be able to turn it around but unfortunately, she couldn’t.

JR and I were only together for a year and a half when he agreed we could get a cat.   Nerd law students that we were, we made sure to have terms in place before we started looking for one – things like how we would handle expenses (50/50 split), who she would live with (me most of the time) and what would happen if we split up (I would take her).  We met Annabelle at the Capital Area Humane Society in March of 2007.  We waited until we found an orange kitten since JR grew up loving the comic strip Garfield and loves the color orange (Go Vols!). Initially, we were considering taking home one of her sisters, but she batted JR’s head as we walked away (her cage was eye-level, on top of another cage) and he changed his mind saying that “she chose us.”  She was tiny and furry and so much fun. 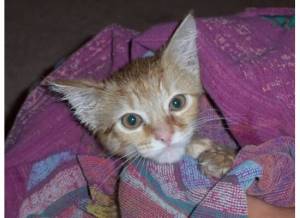 Annabelle lived in more places and countries than many humans.  She moved with us to multiple apartments in Columbus, our apartment in DC, and then our homes in Kosovo and Georgia.  She was well-traveled but as you might imagine, did not enjoy flying.  I sobbed the first time we dropped her off at the United counter at Dulles to make the trek to Kosovo.  The employee assured me that she would be fine and when we landed in Pristina, we could pick her up in a special designated area for pets.  To our shock (although after living in Kosovo for a while it all made sense) Annabelle’s crate was the first piece of “luggage” to arrive on the baggage carousel with the rest of the suitcases.  Special pet area, sure.  You would have thought we were transporting an exotic zoo animal through the airport with all the stares and strange looks we received from the local Kosovars.

We rocked her world again when we brought Abby home, although I don’t think she took too much notice until Abby could crawl.  She was always sweet with Abby, allowing her to pet her and hug her all the time (really it was more like Abby would drop to her knees and try to lay down on Annabelle to show affection.) Her treatment to Abby always amazed us since she usually treated other people with indifference or total disdain. When Annabelle became sick this time and she wasn’t moving around as much, we kept her in the guest room.  Every morning and night, Abby asked to check on her and asked us if she was “all better.” 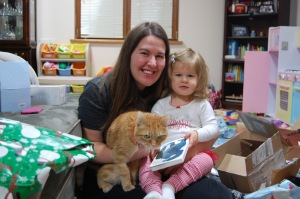 We are sad to lose her and our house feels different without her.  She was wonderful to us and exhibited more patience with Abby than we ever would have expected. We will always have a special place in our hearts for Annabelle.

She will be missed. 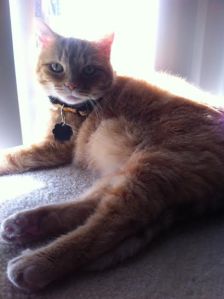