Somehow I let a whole month pass without even attempting to write a blog post. Oops!

May was a wonderful month here. There were multiple local holidays, including Memorial Day, so we had long weekends and several short weeks. Glorious!  Instead of doing something really cool, or travel to a beautiful destination, we made the adult decision and took advantage of the first long weekend to try the 3-day potty training method with Abby. We debated the idea for a bit but she was showing signs of readiness so we cleared our schedules, read helpful tips on the internet, and purchased supplies.

The first day was absolutely terrible. The book we were trying to follow recommended having your child spend the whole day indoors, completely naked/bottomless, and you watch them like a hawk every second to catch them going to the bathroom, then whisk them off to the potty. Constantly watching your child is actually exhausting and tedious. By 10am JR and I were looking at each other and wondering how we’d survive the entire day. JR kept a running tally and by the end of the day the score was Abby 7 and Parents 7. A 50/50 split but that’s still a lot of Clorox and we were not mentally prepared.

Luckily, we turned a corner on day 2. We threw out the idea of going naked and went with some “big-girl” underwear. Abby is a huge fan of the show Paw Patrol, so we gave her some special Paw Patrol underwear and made a big deal about keeping them dry. Suddenly things started to click for her!

Of course, there were still a few accidents that day but nothing like the catastrophe of the first day.

Day 3 was even better and we couldn’t believe how quickly Abby took to the sudden change. After about a week it felt like we could safely say she was potty trained (we’re using pull-ups for nap and at night, although sometimes I think she could skip those, but I’m not willing to risk it and deal with the potential mess).

Another big milestone for our girl – she turned 2! We celebrated by having a joint party with our friend’s daughter. I didn’t get any good pictures of the birthday girl, but there is a video of Abby on my lap while everyone is singing Happy Birthday, and at that exact moment she stuck her fist in her cake. It didn’t mess it up too much, but she was furious that her hand was covered in frosting. All eyes were on us and I didn’t have any way to clean her up, so I first tried to wipe it off in my hand, and then I resorted to sticking her fist in my mouth and licking the frosting off myself. Put that in the “sentences I never expected to write” column. The party was great fun and thanks to the hard work and creative mind of my dear friend Elizabeth, minimal effort on my part! A win all around.  🙂

Over Memorial Day weekend, we met up with friends of ours and their two kids in Borjomi, a town about 2 hours away. Shortly after we arrived at the hotel, it started pouring down rain while we ate lunch. Abby took a long nap (and so did we) and when she woke up we went down to the pool.  She was totally uninterested, but she sure did look cute in her swimsuit! The rain stopped so we spent some time walking around the hotel grounds and playing at the playground before heading downtown with our friends.  It’s a smallish town but there is an amusement park, cable car, and some restaurants and cafes. 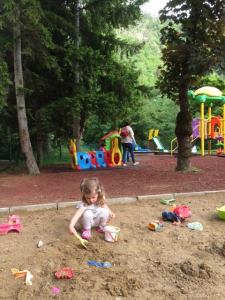 We hopped on the cable car and enjoyed beautiful views of the city and waterfall. On on our ride back down the attendant wanted to smoke, and being so thoughtful to the children and passengers on board, he just stood with the door partially open and blew his smoke outside -while the car was moving. A great comfort, really. Below is a picture I found online that illustrates the open door, now just imagine it looking that way as we traveled back down the mountain.

We had a nice dinner in town and then returned to our hotel for a fantastic night of sleep. We splurged on the deluxe suite so Abby’s pack n’ play was set up in a separate room and that meant peace and quiet for all.

Since we were off on Monday for Memorial Day and we still had our nanny working, JR and I drove to an ancient rock/cave town called Uplistsikhe (good luck pronouncing that!), a few kilometers away from the town of Gori. It’s one of the oldest urban settlements in Georgia and dates back to the Early Iron Age which is around 1200-550 B.C.E. (thanks Wikipedia!). 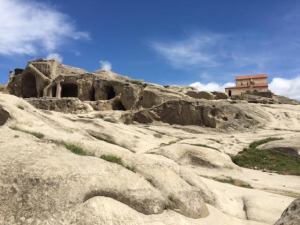 Most of our time has been spent enjoying the warmer weather (although this past week has been all rain and cold) and playing outside. When it was finally warm enough to bring out the water table and our baby pool, a few of the neighborhood kids came over to play. We set up the other pool and even more kids showed up. We had a great time, but made the mistake of storing the pools on our back patio. The wind here is insane, and it’s especially bad in our neighborhood because we’re up on a hill. The little round pool blew away one night and hasn’t been seen since!