I’ve been singing Monica’s “Don’t Take it Personal” (so easy to sing along…It’s just one of them days, that a girl goes through) all weekend. It was just one of those weekends where I was up and then down over everything, big and small.

First, the weather has been super frustrating. We had a few days of sunny warmth, then came rain, then came the wind. The wind here is no joke, I’m not sure I’ve talked about it much but it can ruin your plans, and even your weekend. We wind up stuck inside because the wind is blowing so hard it’s really unpleasant going outdoors. Abby is a very dramatic child and she will run up to us, with tears in her eyes, that we have to move all of her outdoor toys to the garage or else they’ll blow away. Sometimes JR goes along with it, other times he tells her to stop being silly, of course her toys will be fine. Unfortunately we were wrong about the new little slide we put in our backyard, because it slammed into our fence and spent several days laying in two pieces in our yard. Sopo put it back together but it blew over again yesterday so we’ll see how long that thing actually survives out there.

When it’s not windy or rainy (or both) it’s been cold. Like really cold. The kids’ rooms were down to 64 degrees for a few nights. You might think we should turn on the heat, and you’d be right. But there is some weird quirk with our heating and cooling system where you have to submit a work order and ask the Embassy workers to come out and turn off your heat and turn on your AC at the start of the summer. It was getting warm at the beginning of May so we went ahead and did that, and now it appears we jumped the gun a bit. JR pulled a few space heaters from the garage and we plugged them in around the house. Mostly I wanted to warm up the kids’ bedrooms, but I was too paranoid to leave them on upstairs overnight. So this morning – when they both treated us to early wake-ups at 4:30 and 5am (why God, why?) – their rooms were 64 and 63 degrees. Not ideal.

JR is a control officer for a VIP this week, which means a significant amount of extra work for him. A control officer handles all the details of a visitor’s trip – they coordinate motorpool and attend all the meetings, they prepare briefing binders with all the necessary memos and background paperwork, they pick up the visitor at the airport and escort them to their hotel and to all events, and they’re on call for anything that might come up at the last minute. I wasn’t surprised when he told me he had to work late Friday, but my intentions of making pizza went out the window and I thought we should just order in. Apparently many others had the same plan because Dominoes said it would be a 2 hour wait. Back to Plan A of making pizza myself (although Sopo was still there and very kindly offered to make the dough while I played with the kids.)

When JR made it home that night, he said there had been last minute changes to all the paperwork and the binders weren’t completed correctly, so he would need to go back into work Saturday morning. In addition to driving to the Azerbaijani border to pick up the visitor and take her to her hotel that afternoon. Awesome. William and Abby have been waking up earlier and earlier, and when I first heard William Saturday morning, I reached over to shake JR awake and say my favorite words “your turn.” But he was already off to work. By the time he got home later that morning, I was already over the whole day (at 9:30am!) and told him we would most certainly be ordering Baan Thai (one of my favorite delivery places here, one of the few that can consistently find our house and we can order in English) that night for dinner.

I realized while he was gone that we were going to run out of William’s formula. His formula has been a constant issue for us since we returned to Tbilisi. He seems to be reacting to something in the Similac and Target versions we have tried, so we finally found a German brand, Hipp, and a specific type of hypo-allergenic formula that seems to work for him. We usually have to try a few grocery stores and pharmacies to find it, and then they often only have two boxes at a time. A box lasts about 3 days. So now it’s Saturday night, it’s POURING down rain, and I have to run out to the grocery store as soon as JR gets home because we need formula. I went to Goodwill, the German grocery store closest to us, and they didn’t have it nor did the pharmacy. You know the feeling when you run out to the store to get ONE THING, and they don’t have it. I was so frustrated – over the weather, over everything.

We finished up the formula we had left and I ordered a few different brands/types on Amazon, and Sunday morning sent JR to Carrefour hoping he’d find a few boxes. He texted me that they had 8! I instructed him to buy them all. He actually left a few just in case some other family was running around in the same predicament. Now we’re at least set for a few weeks.

It was not my  best weekend. We had another work event, spouses included, on Sunday evening which wound up being quite enjoyable but it was just a tiring weekend. But in an effort to end on a good note, all that rain led to these beautiful rainbows! 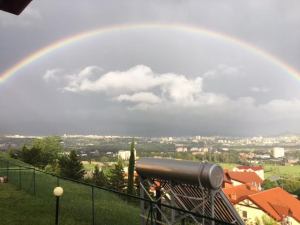 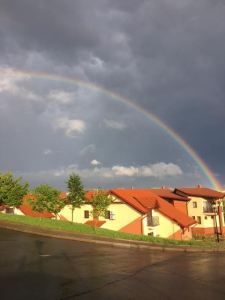