Actually no one said that, I just wanted to make sure my mom left Zurgovani at least once while she was visiting, so I made reservations for one night at Lopota Lake. JR and I took Abby to Lopota with some friends a few years ago, and I thought it would be a nice trip to make with my mom and both kids. And it really did seem like a nice idea – that is until we actually started driving.

(Important backstory. First, JR stayed home, for multiple reasons, so my mom was the navigator while I drove. Also due to a slight error in judgment, my cell phone spent some time in water last week and is on the fritz.)

We borrowed a phone from our friends for my mom’s visit, and I planned to use the Google Maps on it for directions. Almost immediately, we missed a turn. Ordinarily, this wouldn’t be a huge deal but in Georgia, you can’t really just turn around. You have to keep on going until you’re finally able to make a left, then you need to take about 5 more lefts before you’re back on track. When we corrected our mistake, I looked down at the borrowed phone to realize it had about 50% battery life left. Not great for the start of a 2+ hour road trip. And it didn’t bode well for us that we’d been on the road for about 20 minutes and had barely made it out of town.

The first hour was relatively fine. William slept, Abby watched a few shows on the iPad. Then William woke up and he was less than thrilled to be a) awake earlier than usual and b) stuck in his car seat. When he started crying, Abby started crying either in sympathy or just to torture me more, take your pick. This was also at the time the road turns into switchbacks that last forever. Both kids were terribly upset and I was regretting every life choice that led me to be in that car at that moment. Just then I heard the unmistakable sounds of vomit. Abby helpfully announced “William’s throwing up!”. Awesome.

I was panicked because there was no immediate place to pull over, as we were halfway up a mountain. Around one of the curves I saw what looked like a large space to park, so I pulled over and glanced around to see a truck, a van that looked deserted, and no one in sight. Just as I opened my car, my mom yelled “bees!”. Because the spot I picked to stop was a bee colony. Of course.

We drove a bit further down the road and pulled off at spot that was just large enough to get me out of the way of traffic. It didn’t feel all that safe but we didn’t have any other options at that point. I opened William’s door and wanted to cry. Mind you, he was chipper at this point, feeling pretty good apparently. But he was absolutely covered with vomit. The car seat was covered. And do you think I learned my lesson from Abby’s carsickness in Scotland last year, and had a spare outfit, paper towels, wet wipes and plastic bags ready to go for an easy clean up? No, I did not.

My mom and I carried him to the opposite side of the car and stripped him down, then cleaned him with wipes. My mom then did her best to clean out the car seat, but it was soaked. I decided to just keep him in his diaper because I thought he might puke again and we only had two other outfits for him for the trip that were conveniently buried at the bottom of our 27 bags in the trunk. We laid a thin pair of pants down between his poor little naked body and the wet car seat and when I started to strap him in, the screaming began again. I felt TERRIBLE. Abby also started crying – AGAIN – because she felt bad for William and had decided she no longer wanted to be in the car. We had a full hour left to drive and no end in sight to the switchbacks. I wanted to call JR and beg him to charter a helicopter and put me out of my misery. But we soldiered on.

Both kids fell asleep eventually, and we had about 20 minutes of relative peace just as we arrived at Lopota. The resort is spread out, so after you park you can walk down a little ways to the administration building to check in, and once you’ve done that, they have bellhops who drive trolleys and large golf carts around to move you and your things to your room. There was a separate small building before the check-in for the gift shop. My mom had William in his stroller, just in his diaper (come at me, bro), and Abby walked into the check-in area with me. She was bored quickly because there was a long line, so I sent her back out to wait with my mom. More waiting, more waiting, then Abby came back to show me the very overpriced but adorable hat she conned my mom into buying for her.

As she was coming in I saw a flurry of activity outside – I could see out the two large windows on either side of the door, which was also open – that a large 4×4 ATV looking thing had crashed into the building we were in, about 10 feet away from us. It had also very clearly hit or run over a person, although I couldn’t see that part because it was happening below the window, but I saw a small crowd gather to push the ATV back off the person and trying to offer help. It scared the crap out of me. In the split second it happened, I looked down to make sure Abby was at my side and that I could see my mom and William out the other window. I didn’t know if it was a child or an adult that had been hit, but I really feared the worst. Thankfully, the adult employee who was hit was okay except for scrapes and bruises, although she looked very shaken. My mom saw it all happen and said that two young kids – Abby’s age – were playing on the ATV which was parked on an incline with a rock in front of the tires to act as an emergency break. The rock moved, the ATV started rolling down the hill and no one could stop it until it hit the woman and the building. Ugh. Very glad no one was seriously injured.

Despite all of this, we actually had a really nice time once we settled down. The family size/triple rooms are huge. We requested a ground floor room which is perfect because there is a nice large patio and we were right in front of the main pool that we used (there are I think 4 at least on the property now).  We enjoyed a few long walks around the lake, stopping at the Kids Club which had some toys, drawing space, and a large sandbox.  Both kids loved feeding the ducks. Lopota’s food doesn’t impress me, and it’s expensive, so we packed a lot of snacks. I was dreading the ride home, but thankfully an Embassy colleague recommended a different route. It added about 20 minutes, but it was relatively straight so that was a huge help. No puking and minimal crying – I’ll take that as a win! 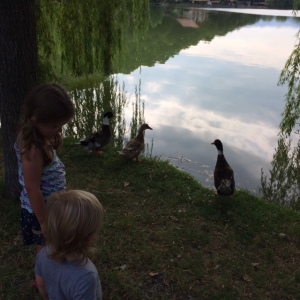 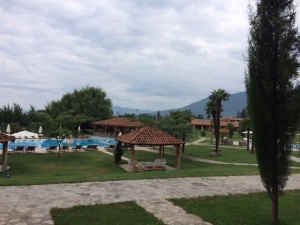