Some pretty exciting things have happened over the last month. We welcomed our third baby, Jacob, into the world about three weeks ago. And JR surprised me with tickets to see Hamilton just before the baby arrived. If you think it’s a little odd that I’m putting Hamilton on the same level as having another child, well then you probably haven’t seen Hamilton.

It was SO, SO good. Months ago, when we knew we’d be in Ohio and that the show was touring in Columbus at the same time, we looked into buying tickets. They were super expensive and we decided we’d just wait for an opportunity down the road. JR gave me my Valentine’s card a few days early, which made me a little suspicious that something was up even though we had agreed no gifts this year. I couldn’t believe it when I saw the tickets to the show! We were a little nervous because I was 38+ weeks pregnant, so we made sure to pack our hospital bags in the car just in case when we drove the hour and a half to Columbus. JR joked that the tickets were so expensive that if I went into labor during the show I had to stick it out til the end. Luckily it was a non-issue and we were able to enjoy every second of the performance. If you have a chance to see it, you absolutely should. I’ve been listening to the soundtrack ever since.

In fact, we listened to some of my favorite songs from the musical while I was in labor. I cannot say enough good things about my doctor here, and how lucky I feel that she was able to deliver all 3 of our children. And she’s a Hamilton fan, so she was singing right along with us. Jacob was born on 2/22 and we are in love. I knew he would be our last baby, so it was a day full of last moments and lots of emotions.

Most of the newborn stuff is coming back to us, but juggling 3 kids (even with a tremendous amount of help from our family) is definitely a new challenge. We’re taking it day by day. Abby is embracing her big sister role and William is indifferent for the most part. 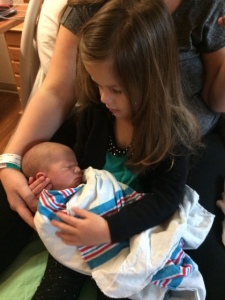 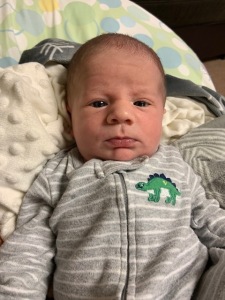 Hopefully the next time I write I’ll be getting a little bit more sleep!