That’s not my normal exaggeration, our flight from Cairo to Washington, D.C. was my longest plane ride ever. It was scheduled to last 12 hours, and we were certainly seated on the plane that long, but from take off to landing I think it was about 11.5 hours. Truth be told, it wasn’t terrible. The fear and anticipation was probably worse for me mentally than the actual flight.

We woke up around 5:00am to get ready. Kids were up at 6, and by 7:15 we were in our shuttle van on the way to the airport. Considering that the Cairo airport was closed and we were the only flight of the day, you might have thought that the check in process would be faster. It was not. I was hyper-aware of every thing the kids touched (I lost count at 1000 opportunities to get sick). It was a relief when we dropped off our checked bags and then went to wait at the gate.

We had Jake’s monster car seat for the plane, 2 strollers that we gate checked, and 5 carry on bags packed to the brim with food, mostly. After our last flight (we hadn’t flown since we arrived in Egypt in August, which is unusual for us) I vowed to pack less activities for the kids and rely more on the iPads. The issue is this flight was during the day, not an overnight. My kids love movies and shows, but even they don’t want to watch a screen for 12 hours straight. 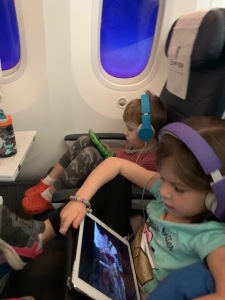 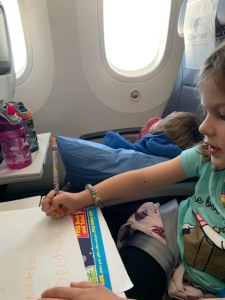 Honestly, the flight was as uneventful as we could have hoped. William napped for a while, Abby stayed up the entire time, and Jake slept off and on. Jake had the hardest time since he’s recently begun to walk and he loves to explore. He wanted to get down on the floor and we had to keep him confined to our laps or his car seat. JR and I took turns passing him back and forth most of the time. The lovely passengers in the rows right behind us played endless peekaboo with him. Everyone did pretty well until the last 20 minutes or so. By that point it was about 11pm our time, so well past bedtime. Abby finally broke down in tears, William was throwing a major fit, and Jake was fighting sleep in the carrier.

We were told our strollers would be at baggage claim, but we weren’t prepared for the long walk or how many times William would throw himself on the ground while we made our way to a shuttle and then to passport control. JR was carrying the 20+ pound car seat, I was wearing Jake, and William alternated being carried, crying, and occasionally taking a few steps on his own before tantruming all over again.

We were a mess while we waited in a short line for passport control. Just then, I remembered that I had a banana in my backpack leftover from our snacks. JR told me not to worry about it, we could throw it away on the other side. I was like, yeah but what if he asks me about it? He gave me this look like, don’t you dare even think about it. We walked up the customs officer and answered some standard questions about where we had traveled. Then he looked directly at me and asked if I had any food in my bags. I said, yes some snacks for the kids. He followed up with “any fruits or vegetables”?

As casually as possible I said, oh I think I still have a banana in there but we don’t need it so I can just throw it away. He said “I’m sorry, you’ve passed the point of no return. You’ll need to visit the team at the Agriculture office to take care of this.”

You can probably imagine the look JR gave me.

Honestly, it’s been a week and he still hasn’t forgiven me. But I couldn’t lie! To a law enforcement officer! He put all of our passports in this clear plastic box and called for a colleague to direct us down a very long path, far in the direction we wanted to be going. We walked and walked. Well, William didn’t really walk, of course. Finally we arrived in a separate waiting room set up like the DMV. I panicked. What had I done?! Just as we were called up, an officer informed us one of our children (I’m sure you can guess who) had run away. William made it almost back to passport control before JR caught him.

Meanwhile, the Agriculture officer walked up to me and said “ma’am, so you have a banana in your bag?” Near tears I replied, “yes, and maybe even two clementines. I’m sorry!”. He said why don’t you give me those, I’ll throw them away, and you can go get your bags. Bless his kind heart.

The whole ordeal lasted less than an extra 20 minutes, but it was still a setback. We made it back to baggage claim and I won’t bore you with the frustration of collecting all of our bags, not being able to find one for the longest time because someone had pulled it off and pushed it to the side, and the conveyor belt holding the strollers not working and preventing us from getting ours off.

There were no connecting flights to Ohio that night. When faced with the idea of taking all of our stuff, checking into a hotel, and returning to the airport the next day, my mom, as usual, stepped in to save the day. She rented a 15 passenger van and drove from Ohio to DC with my brother to pick us up. They were waiting for us when we walked out of baggage claim. They scooped up the kids, helped us load the car, filled us with food, and let us sleep most of the 6 hour ride home.

We’re getting settled in our AirBNB in my hometown, just a few miles from my parents. We’re quarantining with them and my brother. We all know it’s a risk, but no one is working or having physical contact with other people so we’re doing our very best, and we’re so thankful to be home. 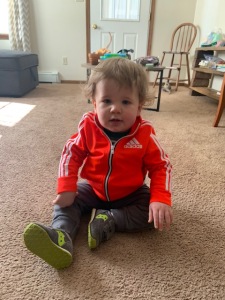 2 thoughts on “The Longest Flight”