I’m a big fan of Garth Brooks. For years after his 1997 free concert in Central Park, my friend Allison and I would joke about how we missed the boat on that one and should have just driven to New York to see the show.  I don’t think either of us had a driver’s license at that point (and dear Allison lost her license almost immediately after she got it anyway and then remained license-free until 25 or something), but details and logistics were irrelevant.  We were very disappointed that we didn’t see that concert, or for that matter, any Garth Brooks concert.   On my list of performers I’d love to see live, Garth  is pretty high up there.   The list includes Guns N Roses, but only if it’s the original group and only if Axl looks like this: 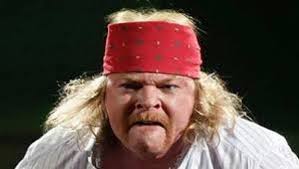 That picture hurts me deep in my soul.  Anyway, back to Garth Brooks.  During law school, we watched the Best of Will Ferrell on SNL dvds more than a few times and the skit with Garth Brooks is fantastic. You should probably find it and watch it immediately. Will Ferrell plays Lucifer, trying to help Garth’s character write a hit song.  The only problem is that Lucifer lacks any musical talent and blames it on his guitar being out of tune.  Also, “Fred’s Slacks” is a winner!

I  saw something online the other day that mentioned Garth would be touring again soon.   Per his website, he’ll do a North American tour this fall, but first he’s going to have two big shows in Dublin, Ireland this summer.   Holy excitement, Batman.   How awesome would it be to finally see Garth Brooks in IRELAND of all places?  I immediately started looking up prices for flights and concert tickets.  Then I messaged JR about this once-in-a-lifetime opportunity.

Me:  Um, maybe we should try to go see Garth Brooks in Ireland this summer.
JR:  And the baby?
Me:  The baby will probably love Garth.
JR:  What about the noise?
Me:  We could just get a babysitter in Dublin.
JR:  You know a lot of people in Dublin to recommend a babysitter?
Me:  Or, you could just crush all of my dreams.

This happens a lot. Here’s another recent exchange about diaper bags. (In my defense, I really have done a lot of research online and people seem to LOVE this bag, AND I wouldn’t pay full price, I’d only buy it if I could find it at the outlet.)

Me:  Look, just hear me out and don’t make any judgments until I’m done.
JR:  This always ends well.
Me:  I’ve been researching online, and the best diaper bag on the market is a Kate Spade bag.  It’s highly recommended but it’s a tad pricey.
JR:  A Kate Spade diaper bag.  That’s funny.
Me:  It’s really practical.  Especially if we have a few kids, and we divide the price of the bag by the number of kids we have, then it kind of evens out to a normally priced bag.
JR:  You know a designer diaper bag is an oxymoron, right?
Me:  We can talk about this more later.

Anyway, tickets for the show in Ireland sold out in 90 minutes, so now I’m hanging all my hopes on the Kate Spade bag.