At first I thought September was kind of dragging along, and then all of sudden it’s October. Funny how that works.

Over the weekend, Stacey and her husband hosted a cookout for the whole Embassy community, and it was great. They had a ridiculous amount of meat – pork and beef bbq ribs, hamburgers and chicken – and everyone else brought a side dish. Because they are from New Orleans, JR wanted to make his special jambalaya. It worked out great for me because I didn’t need to cook, and everyone at the party loved it. Success!

Apparently people from New Orleans take their grilling quite seriously – look at that thing. This was the second round of meat, I was probably busy eating and didn’t get a picture the first time, but the whole grill was full.

There was also a surprise guest there – this ADORABLE little puppy. One of JR’s co-workers found the puppy wandering around outside the Turkish Embassy, and took him home hoping to find a permanent home for him. When JR first told me about the puppy, we had a lengthy discussion about whether we should get a dog right now (spoiler alert, this does not end with us getting the puppy!). We agreed it wasn’t great timing, but that was before I actually saw this adorable creature, and when I did, I wanted to take back everything I’d said and take him straight home. Logic prevailed, and our friend Amy, who’s been looking for a puppy, adopted him! Isn’t he the cutest thing? 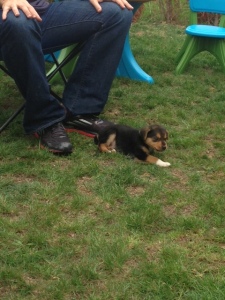 Now that it’s October, Halloween planning is in full swing. It’s JR’s favorite holiday, and he’s coordinating all the volunteers for the children’s party hosted at the Embassy. At last year’s party, they went through 150lbs of candy in an hour! So our CLO office has been asking for candy donations. JR forwarded the e-mail along to our families, and they have been AMAZING and have sent so much candy for the kids. (I swear, it’s for the kids. JR won’t even keep it in the house because he’s deemed me somewhat untrustworthy around candy). Here’s a picture of just one package we got.

Our families have been awesome about sending care packages. Most food items are available here in some capacity, but it’s still really nice to have my mom send me a random package with jello, frosting, muffin mixes, and mints! Now if we could just figure out a way for her to send me an East of Chicago pizza, I’d be set!

In case you were curious, it’s October and I’m still not working. I’m really close, but the government shutdown is not helping my situation. At this time, JR is going to work per usual, and we are very much hoping that his paychecks are not delayed. No one really knows what to expect or how long this will last. I am disappointed that it came to this, and I really feel for our friends who were sent home from work yesterday, and don’t know when they can return. My proposal is that we kick everyone out of the House and Senate and start fresh with new people. Except Sherrod Brown, because he’s basically perfect.

So stay tuned to see if I ever actually work again!