I had a wonderful visit with family and friends in Ohio for almost 2 and 1/2 weeks.  Unfortunately, I didn’t take many pictures – the only ones I took were of the delicious food I enjoyed! I joked with my mom that I spent most of my visit napping and eating. It’s not really a joke, because that’s basically what happened. 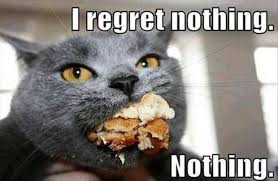 Before I left for Ohio, we celebrated our first Thanksgiving abroad with some of our good friends. We had turkey, mashed potatoes, stuffing, pumpkin pie, and so much more. We were even able to watch the Macy’s Day parade and some football so it actually felt pretty similar to being at home!

The next day, I woke up early to catch my flight(s) home. As soon as I landed in Newark, I could smell the McDonalds. You don’t realize how much you miss it until you can smell it, and my nose led me to a large order of fries and a fountain Diet Coke with no ice. Pure bliss! Plus, I was able to use my debit card for the first time in months, which felt super exciting. That same debit card would later get me into trouble at Target, Old Navy, Sephora, and various other places. What, it’s Christmas!

Thanks to my Mom, I was scheduled for a doctor’s appointment while I was home so I could meet my OB (selected by my Mom, of course) and have another ultrasound. Everything went well, and my mom and sister were able to see the baby and we took pictures and video for JR. They showed us some images in 3D which frankly alarmed me, but I was assured the baby will look better in person.

Lest you think that JR spent that two weeks pining away for me in Kosovo, he was actually in Bangkok for work. I like to think he was still pining a bit. I’m trying to convince him to do a guest blog and write about this trip, but considering how motivated I’ve been to blog myself, this is looking less and less likely. To summarize, he stayed safe during the protests and he enjoyed all of the markets and local vendors.  His suitcase was 22lbs overweight on his return flight because of all the presents he brought back!

Now that we’re both back home (home is such a funny word to me right now, because I feel like I have a few homes!), we are back to work and getting ready for Christmas. JR excels at wrapping presents and traditionally wraps his own once I put them in a box, so he’s been hard at work on that. Our CLO office and friends here have planned several fun holiday events. So far we’ve had cookie exchanges, a silent auction, a door decorating contest, and an Ugly Christmas Sweater competition on Friday. Also, one of our friends is having a Winter Solstice party tonight, so we’re headed over there shortly.

I can’t believe Christmas is next week!   I mentioned we have a lot of presents, right? 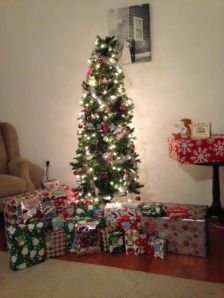 This is another post I began writing back in September. It’s about pregnancy and babies, and if you aren’t a big fan of those things (at the moment, I find them both to be overrated), you might want to skip this one!

By joining the Foreign Service, we knew that life would be a bit different for us than if we lived and worked in Ohio (or anywhere in the States, really). Although I don’t have a direct comparison point, I think we’re getting some exposure to how different things can be overseas.

First, we told our families very, very early on about the pregnancy. It just so happened that we found out while we were in Ohio over Labor Day when we were there for JR’s sister’s wedding. Under normal circumstances, we think we would have kept the news to ourselves for awhile, but honestly, I never thought we’d have the chance to tell our families in person, and I didn’t want to miss out on that. And my mother’s reaction absolutely made it worthwhile! She almost fainted and had to be propped up by JR!

When we arrived back in Kosovo, I called our health unit at the embassy and made an appointment. I assumed at the first appointment they’d just do a blood or urine test to confirm the pregnancy, and then we’d schedule a follow up down the road. Our main medical officer, J, was out of town, so G, her assistant, was able to meet with me. She asked me some questions and gave me a bit of information about what would likely happen during the first trimester. Then she said, “We would give you a pregnancy test here to confirm, but ours are expired, so…we’ll just go with your results.”

Now imagine your American ob/gyn telling you they can’t give you a pregnancy test because theirs are expired?! I was a bit concerned.

G told me that our health unit doesn’t have a lab, so they have an agreement with a European Union agency here, and we’d do lab work there. Then we’d go to a local clinic for my first ultrasound. G schedules the appointments, and she accompanies me to them and to ensure my comfort, translate, etc… As promised, she took care of the scheduling and called me to say that we had two appointments that Friday.

The lab was a quick stop, just a blood draw and then with JR in tow we went to the clinic for our first ultrasound. We were previously warned (by my mom, mother in law, and the internet) that it was unlikely we’d see anything this early. Truthfully, I don’t know if she scheduled one so early because I seemed nervous, or if it’s standard practice here. Either way, we were excited to get some actual from-the-doctor confirmation that I was pregnant.

The clinic is run by a German husband and wife and they are both ob/gyns. My appointment was with the wife and for the life of me, I can’t recall her name at this moment. Her English skills are…not so great. She says she can understand it, but she’s more comfortable speaking in German. Luckily, G speaks German and acted as a translator. We were already quite nervous, but it really added to our nerves that we couldn’t understand a word the doctor was saying, and we had to wait patiently for a translation. It was particularly hard during the actual ultrasound, because both women were pointing at the screen and having a lively conversation back and forth, while I just laid there and JR held my hand. Thankfully, G translated that everything looked to be okay, and we scheduled a follow up appointment.

This is all very new to us, but we are slowly figuring things out. We are grateful for the care we’ve received here, and we know we are in good hands (language barriers be damned). It’s incredibly convenient to have such an accessible medical unit, and to be able to make an appointment or walk in anytime we need something. Talking to parents with small children at post, it seems that it’s a great benefit to have such access to medical care.