When I realized I would be heading back to London for a quick 3 day trip, I somehow convinced JR that I should take Abby along. I’m so glad I did, because I don’t know when we would have an opportunity like that again and it was pretty cool traveling with just her on a girls’ trip to London. Well, cool and a touch exhausting. It’s hard to be set up for success for any trip when you have to wake up at 2am and leave for the airport by 2:45. Abby popped right out of bed (the idea of going to bed with her clothes on just thrilled her) but had a harder time than expected saying goodbye to her Dad. She perked up during the car ride and our first flight, but tiredness set in once we arrived at the Istanbul airport for our layover.

All smiles on the first flight

If you fly out of Tbilisi and connect anywhere, you have to go through security again. It’s a huge hassle and particularly awful in Istanbul, where the security line was backed up as far as the eye could see. There wasn’t even a line to join, as the spot where we were backed up was just a mass of people trying to get ahead of each other. It was hot, we only had an hour to catch our next plane, and Abby was already over it. Splendid. Luckily, I made eyes with an employee (I told JR that during this trip I really perfected a look of exhaustion and desperation coupled with kindness) and we were ushered ahead, skipping the ENTIRE line. Victory! I convinced Abby to take a nap during the second flight, and then had to cajole her along at Heathrow because it was a lot of walking. I debated bringing the stroller but figured it would be unnecessary and man, was I wrong. I hoped we could get into our room right when we arrived, but we were still too early and early-check in wasn’t an option. After a quick lunch I went to my favorite burger place that I insist on visiting each time I’m in London and then took her to get pasta. When we returned to the hotel the room was finally ready. Abby gets really excited about hotel rooms. Her face was priceless when we walked into the super simple room, she couldn’t wait to pick a side of the bed, pull things out of the backpack, and of course, jump on the bed.

Over the next few days we enjoyed the Big Bus Tour, the London Eye, and several great playgrounds. I like the hop on, hop off bus tour because you can see a lot at once, and it’s also a nice transportation option to get to the different sights and parts of the city. For the London Eye, if you enter the ticket office, go directly to your right and use the self-service kiosk to save time, as the ticket line was quite long when we arrived. I considered paying more for a Fast Track ticket, but opted for a standard which was still expensive. Fortunately, the line moves quickly and we probably waited a total of 20 minutes, and we were kept moving almost the whole time.

Jubilee Playground is located directly behind the London Eye and I would say it was perfect for kids 4 and up looking to let off some steam. There was another small playground just a few minutes’ walk from Buckingham Palace, located in St. James Park. It had restrooms for children, picnic tables, and a small food vendor outside, and would entertain toddlers and more. The best playground in my opinion was located in Hyde Park, the Diana Memorial Playground – and is perfect for all ages. We absolutely loved this place and would have stayed much longer, but Abby had woken up around 5am that day and was in need of a nap. All of the playgrounds were fenced in and well-maintained.

On the way to dinner one night, I saw Hamleys Toy Store up ahead and made a critical parenting error.

Me: Abby, we’re about to walk past a super expensive toy store. We can go inside and look, but we can’t buy anything. Do you want to look or should we just skip it?
Abby: Let’s go!
Me: Okay, we can, but remember, we really cannot buy anything in this store, okay?
Abby: Mm hmm.

Of course I didn’t let her buy this! How would I even get it home? Plus it probably cost 200 pounds.

But then she saw this bear (wearing a purple dress and a crown) and gave me puppy dog eyes and I couldn’t say no. I’m weak.

We had dinner at the Rainforest Cafe, and she was very entertained by the animals and sounds of the faux rainforest. Dinner was expensive and not particularly tasty, but she enjoyed herself. 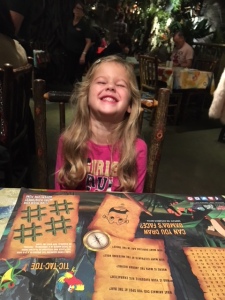 From her point of view, the highlights were drinking hot chocolate, the playgrounds, ICE CREAM!, and staying in a hotel together. When we went to bed that first night she gave me her biggest smile and said “This is just like having a sleepover, Mom!”. 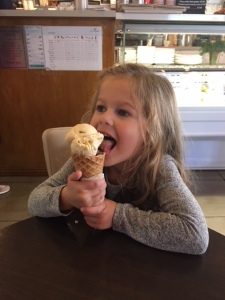 We were both happy to get home to JR and William, but I loved the one-on-one time with my sweet girl.

Our first stop Friday morning was to walk across the Tower Bridge, and then take a tour of the Tower of London. The Tower is guarded by Yeomen Warders, more commonly known as Beefeaters, who are retired members of the Armed Forces and technically their job is to guard prisoners of the Tower. Now they act as tour guides, and we had a really enthusiastic and funny guide to show us around. We saw Traitor’s Gate, the spot where Anne Boleyn was beheaded, and the Crown Jewels. In a stroke of pure genius, they have those moving sidewalks (people movers, like in airports) that move slowly past the Crown Jewels display so that people can’t stand in front of each item forever and prevent others from seeing things. So smart, those Brits! 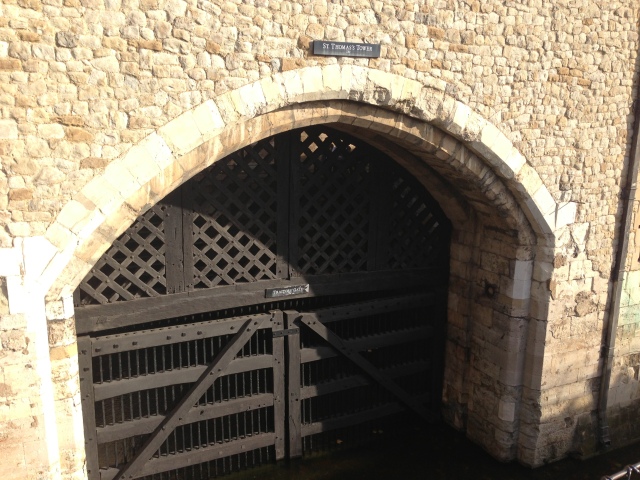 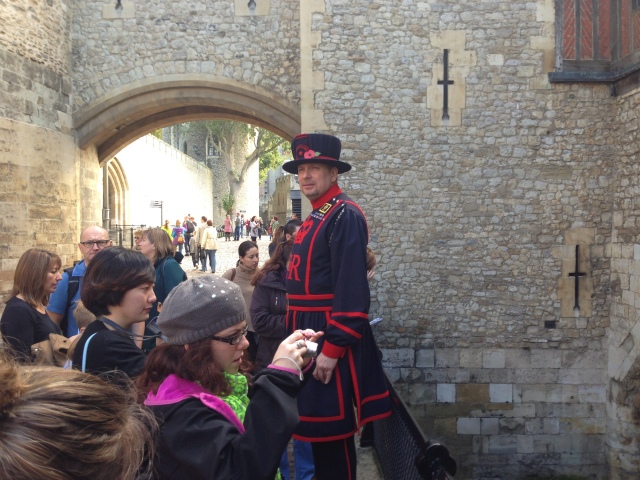 After that we started the bus tour to see the the city. One unexpected sight while in London was the amount of signs promoting the NFL and people wearing NFL jerseys. There was a huge promotion of the NFL going on in the days leading to the game on Sunday where San Francisco was playing the Jacksonville Jaguars at Wembley Stadium. One of the tour guides on the bus was explaining this game to the tourists and remarked that San Francisco was playing the “Jacksonville Jackals.” JR corrected the tour guide and said that they’re actually playing the “Jacksonville Jaguars” but he then went on to say “it doesn’t matter, the team’s rubbish anyway.” 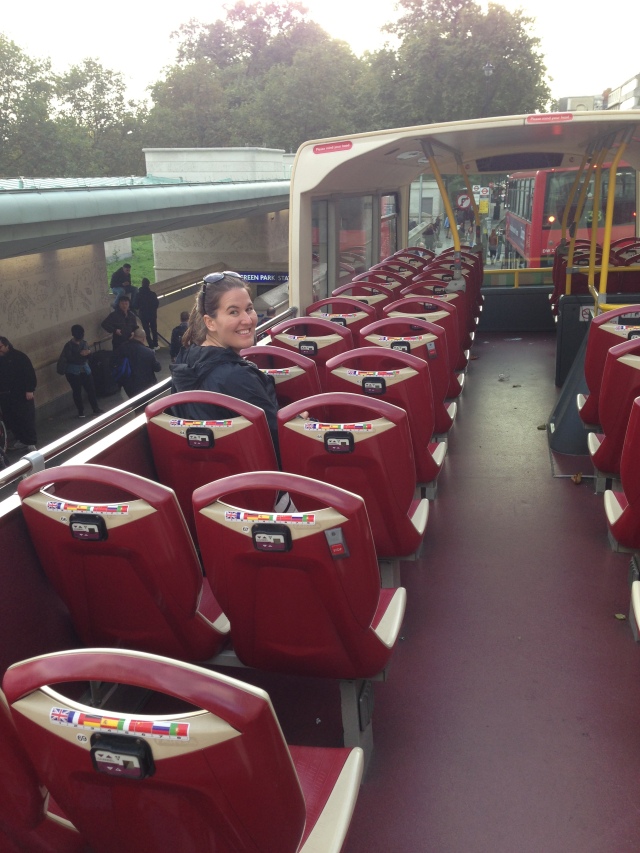 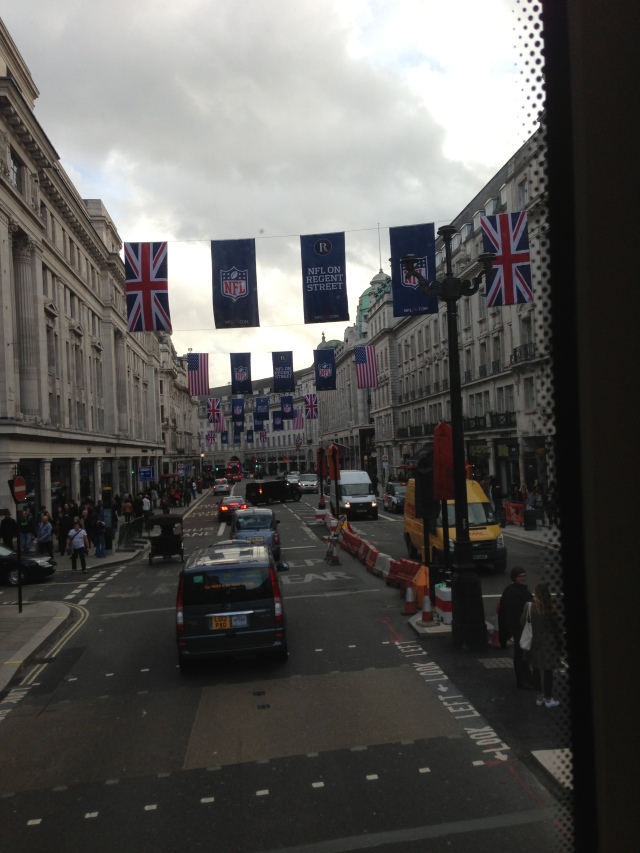 We saw several street performers – playing bagpipes, guitars and other instruments, but I was most impressed by these guys. I could have stared at them for hours! Seriously, how do they do that?

We also did a walking tour called “Ghosts and Gaslight”. Our tour guide was fun and showed us around to several local pubs while telling us legends and ghost stories.

JR tried a Sherlock Holmes Ale at this stop.

On our last night, I still hadn’t found my cheeseburger. I knew I needed to visit an American establishment to ensure I got what I wanted, and JR made quite a fuss when I suggested Five Guys. So, I convinced him to let us eat at the Rainforest Cafe (he’d never been to one before). Oh how I will pay for that choice. First, even though we went at a random time, it was beyond packed with kids running around screaming. JR kept saying “why are we eating at a Chucky E. Cheese in London??” I didn’t even care because my dinner was so delicious, and I followed it up with a fantastic dessert. I was also excited because they appeared to have fountain soda, which we never get here in Kosovo (or really in Europe anywhere). I had 3 Diet Cokes with my dinner and enjoyed each one. Free refills, hurrah! Until our bill came. We were charged 2.85 pounds PER Diet Coke.

I spent $14 in Diet Coke. Oops. JR’s face looked something like this.

Overall, we had a great trip and hope we can visit again soon!